The Musée du Quai Branly, seen from the river Seine, floats above a lush sea of trees and grasses.  Designed by French architect Jean Nouvel, the museum was opened in 2006 to promote non-European arts and civilisations from Africa, the Americas, Asia and Oceania. The collection features African sculptures, Native-American traditional dress, Australian aboriginal art, musical instruments and items used for sacred rituals.

The 1,6 hectare public garden was designed by the French landscape architect and botanist Gilles Clément, known for his ecological planting and for his theory of “le jardin planetaire” or “the planetary garden”.  Clément believes in the global mixing of people, of plants and of ideas, and that plants and landscape are important to all humankind.  He maintains, sometimes controversially, that the mixing of plants from different regions of the world but with similar needs, can increase biodiversity, especially faced with global heating.  In 2016, on the occasion of the tenth anniversary of the garden’s opening, I was invited to a talk given by Gilles Clément in the garden itself.

Clément rejected the idea of creating a traditional style park for the Quai Branly, instead wanting the garden to reflect the natural landscapes of the objects within the museum.  He wanted to find biotopes (ecological communities) that were common to all four continents, but that would also thrive in the Parisian climate. His solution was to plant a savannah garden, dominated by grasses.  The museum’s aim is to send visitors on a voyage around the world, and this garden is their first step, bringing the visitor abruptly in from the Parisian street into a garden that is at once both exotic and familiar.

The long building curves above the site with gardens spreading to the north, facing the river Seine, and to the south, overlooked by Haussmanian rooftops and the Eiffel Tower.

The centre of the museum is raised up on tall pillars, and the garden runs beneath the deep red planes of the museum’s underbelly, joining the gardens together. 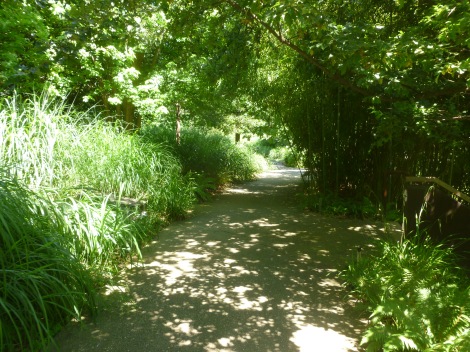 The northern side of the garden is planted with a woodland of oak and ash, creating dappled shade for an understory layer of  grasses, ferns and hydrangeas.  Clément says that over time, the trees have become too dense, shading out the original plants, so he is advising the museum to thin them to allow in more light.

The northern perimeter of the garden is sheltered from road noise and wind by a monumental glass wall of about 8 – 10 metres tall.  This acoustic barrier effectively blocks the noise from the dual carriageway road that runs between the museum and the river embankment and allows the garden to become intimate and self-contained; no longer part of the city.

Thick slate stepping-stones, from quarries near Angers, create the illusion of crossing a dry river bed.

This Wollemi pine is the most “sacred” tree in the garden. Wollemi pines (Wollemi nobilis) were thought to be extinct and only found in fossils, but in 1994 a small grove was found in a remote canyon in Australia.  The pines were propagated and small trees have been sent to botanic gardens around the world, to ensure the future of the species.  This lonesome tree is both a traveller in space and time, being probably over 200 million years old.

At the north-west extremity of the garden, an impressive green wall designed by Patrick Blanc curves into the garden from the roadside facade.  Patrick Blanc is the original inventor of the green wall and this is one of his early examples; it was replanted in 2017.  The wall can be viewed by leaving the garden and walking a few metres to the west.

During the summer months, the museum organises a series of concerts and events, showcasing music and dance from the continents it represents. This green amphitheatre, the “Théâtre de verdure”, when not in use as a venue, provides a secluded place to sit, read, chat or doze.

The woodland in this part of the garden pays host to some interesting trees including this cut leaf alder, probably Alnus glutinosa ‘Imperialis’, planted at one of the entrances to the amphitheatre.  Along the east-west path are planted Quercus cerris, the Turkey oak, with hairy acorn cups, and Quercus robur, the common oak, a wonderful host to insects.  Other trees include different maples including Acer cappadocicum, Acer saccharum (sugar maple), Acer campestre (field maple), and Acer platenoides (Norway maple).

True to his concept of the planetary garden, Clément has used a mix of species thoughout, chosing plants native to France & Europe or originating from similar temperate climates in Asia or North America.  This also applies to the ground cover layer, with European rushes and ferns planted alongside grasses from the American prairies, and Asian bamboos & hydrangeas.

In spring, viewed from the walkway that joins two wings of the museum, the amphitheatre can be clearly seen.  In late winter the grasses are cut back, giving the garden a very different aspect.  The garden changes enormously in atmosphere throughout the year, with foot high vegetation in spring developing into two metre high plants that dwarf visitors in the late summer.

Gilles Clément also chose an animal to inspire his design, one that is also present on all the four continents represented by the museum, and one that often appears in art and on sacred objects; the turtle or tortoise. (The word “la tortue” is used for both animals in French). The rounded shell inspired this curved pergola, made of twined iron reinforcement bars is planted with vigorous rambling roses, Rosa filipes ‘Kiftsgate’, Rosa longicuspis and Rosa ‘Wedding Day’. 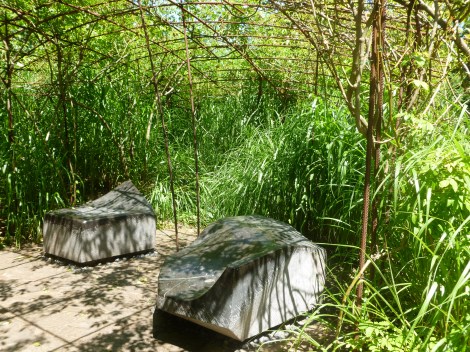 Beneath the pergola sit an inviting group of stone seats with highly polished surfaces.  They are tactile, smooth and cool to the touch, as well as ergonomically-shaped to fit the human form.

The grasses in this part of the garden stay within the planetary theme; a mix of native and more exotic plants, including Miscanthus sinensis ‘Gracillimus’, Luzula nivea (Wood rush) and Carex pendula.  There are also many ferns including Polystichum setiferum, Asplenium scolopendrium (hart’s tongue fern), and Athyrium filix-femina.

The curved form of the pergola is more visible in early spring when the grasses and roses are cut back.  The undulating landforms also take the rounded form of the tortoise, adding much needed soil depth, as the whole garden is planted over the flood-proof storage basements and car-park.  In the foreground, between the lime-green euphorbia and the path, a ventilation grill is visible. I suspect these were also designed by Clément to be round in form to mimic the other circular forms in the garden. 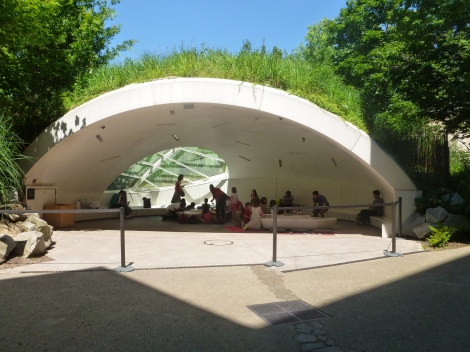 This picnic-pod was added more recently to provide school parties more space.  Jean Nouvel worked together with Gilles Clément to ensure the structure sat well in the garden and reflected the curved forms already present.

The museum café has a terrace in the shade of the building, overlooking the garden. 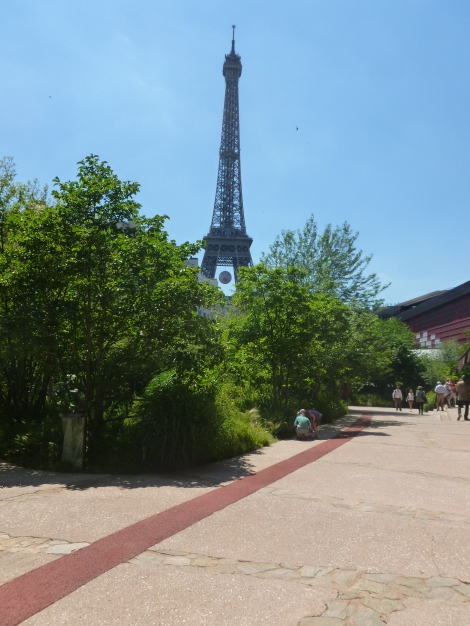 Passing under the building, the southern garden, with the Eiffel Tower soaring above, is planted with multi-stemmed magnolia and cherry trees, loaded with blossom in spring.  These trees are densely underplanted with grasses, ferns and single-flowered species-roses.

The hard surfacing throughout the garden is a pink-ish washed concrete, with a beaten-earth feel, broken into organic forms by bands of natural stone.  There are blocks of clear resin set with insects and leaves placed to the edge of the paths, a charming touch, but sadly many of these are now opaque with the high foot-fall.  The eagle-eyed visitor may spot one that is still visible.  The dark red strip in the pavement, added later, is to guide blind and partially-sighted visitors, and Clément wishes they could have found a less dominating solution.

The trees on this south side of the garden are mainly multi-stem Magnolias and wild cherry trees, including Magnolia Kobus, M. soulangeana, Prunus avium, P. padus, P. sargentii and P. mackii.  Again we see the “planetary” mix of the native species and the “near-neighbour” exotic.

The same “savannah” grasses continue into this part of the garden with more Carex pendula and Miscanthus sinensis, but with the addition of the sun-loving Nasella tenuissima (previously known as Stipa tenuissima) and Celtica gigantea (syn. Stipa gigantea).

Between the museum building and the rue de l’Université, and hidden by trees and high grasses, lie two gravel clearings.  Benches in the shade of the cherry trees are popular on summer afternoons.

An oval terrace, paved in slate, is another reference to the tortoise with huge irreglar slabs to mimic the pattern of the shell.  The paving is divided by a low wall with steps, a homage to the Chinese and Japanese traditions of raised entries.  These threshold steps bring the consiousness of the visitor to the act of entering a space and are also said to protect homes from evil spirits; evil spirits cannot step up! 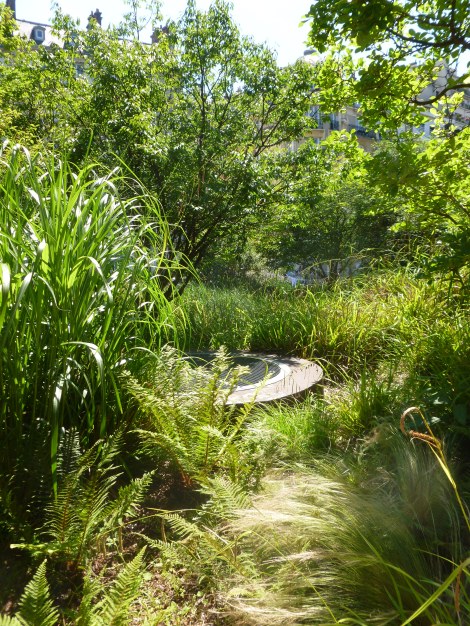 Another round ventilation shaft is artfully concealed in among the trees and grasses.

Along the boundary with the rue de l’Université runs a long natural pond or moat, made all the more stunning for its surprising juxtoposition with the urban street.  The boundary fence is an object of beauty, with metal “reeds” keeping out the unwanted visitors yet letting through the ducks and moorhens who have made it their home.  On quiet days there is also a heron who lurks in the rushes.

An image take from inside the museum in March shows the undulating organic form of the pond and the reed fence.  The magnolia trees are in flower.

A silvery wall, doubling as a bench, creates the boundary between the street and the water, and mirrors the silver onion dome of the Russian orthodox cathedral.  The dog is very tempted to jump in, to swim or to chase….. 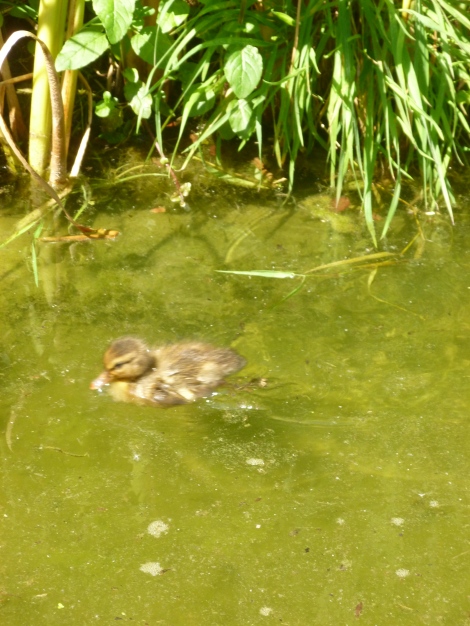 This garden is so well designed that even objects of necessity are beautifully made.  The “reed” fence turns north to run through the garden, and a ventilation shaft is raised to make a handy seat.

These perspex rods are a lighting installation designed by Yann Kersale called “Lô”.  The upright glowing “grasses” contain fibre-optic lights that glow green, blue and white at night.  You can see a short film of the installation at night here. 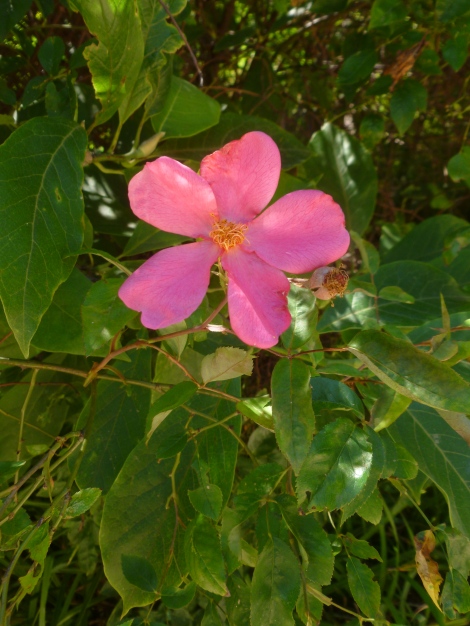 This garden, for Paris, was ahead of it’s time when it was completed in 2006, and still feels adventurous today, given that the trend for naturalistic planting in public space in France lags behind the rest of Europe.  The genius of the design comes from Clément’s desire that the garden reflect the ethos of the museum, including the subtle use of the tortoise motif and of plants from the continents featured inside.  He is true to his convictions about planetary mixing, using both native and exotic plants, many of which are of the same genus if not the same species of plant (for example, Acer saccharum (the sugar maple, originally from North America and Acer campestre, the field maple, a European native). His theories are backed up by recent research by the Royal Horticultural Society (UK) which found that a mix of native and more exotic plants can create rich habitats for invertebrates and thus promote biodiversity in gardens. Some ecologists might prefer 100% native plantings, but with a limited indigenous palette and the rigours of public space, Gilles Clément’s choices make a good compromise for this urban setting. The marked contrast between the rectilinear style of the city of Paris and the naturalistic textured planting & organic forms within the garden is striking, accentuating the wild savannah feel.  This garden is a joy to visit.

Part of the planting plan for the garden.  © Musée Quai Branly & Gilles Clément.

Entrance to the garden is free.  The opening hours are :

Lynda Harris is a landscape architect and garden designer based in Paris.

3 responses to “Savannah in the city, the gardens of the Musée du Quai Branly, Paris”